Story and photos by Lisa Sorg

I have to say, I was dreading this part: Noisy highways, strip malls, concrete and asphalt. The only respite was to be a trek along a segment of the Al Buehler Trail. Instead of realigning the trail, as originally proposed (and which would have horrible), the light rail line will be elevated over part of the trail and the Duke golf course. To accomplish this, GoTriangle will have to acquire 5.6 acres of Duke Forest. The Draft Environmental Impact Statement says there will be “negligible effects related to visual and noise conditions.” (See page 4-121 at the link above.) 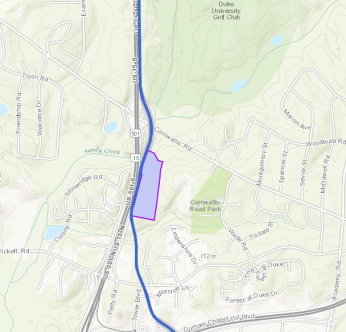 From here, the line cuts to Cornwallis Road, near the Jewish Community Center, the JCC Day School, Carter Charter School and Western Boulevard/U.S. 15-501. Here, GoTriangle has considered building the ROMF—rail operation maintenance facility—at a former Pepsi plant. It would require a rezoning of the land but with less bureaucracy than other sites.

Not so fast, said the JCC. Several JCC members and leaders are concerned the facility would also gobble up 2.5 acres that the Jewish Federation owns, and has plans for building recreational areas.

“I am also concerned with the potential impact on synagogue activities,” wrote Pam Barth, a JCC board member to GoTriangle. “Placing a 24-hour maintenance enterprise adjacent to a house of worship is likely to have an adverse effect on the atmosphere and intent of our worship services.”

“Imagine a worship service, a Bar/Bat Mitzvah, or even a funeral, interrupted by the clanging of tools or the squealing of wheels as a rail car turns into the ROMF for maintenance.”—Pam Barth, JCC board member

Now, to be fair, ROMFs don’t have to be ugly or noisy. 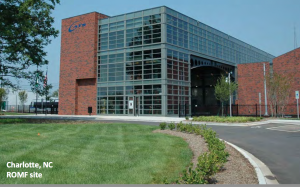 And it’s worth mentioning that there’s an imbalance of political power when it comes to siting these types of facilities. DATA’s bus maintenance facility is on Fay Street, near a largely minority (52 percent African-American, 40 percent Latino) and low-income ($21,463 annual median household income, well below the $50,000 AMI for Durham) neighborhood.

Contrast those figures with the $79,000 AMI, 80 percent white demographics in the Cornwallis neighborhood.

Thus, Farrington Road area (80 percent white, $86,000 AMI) is the (very controversial) ROMF choice for now. However, Councilwoman Diane Catotti said a couple of weeks ago that she still wants Cornwallis to stay on the table.

The line continues down Western Parkway, paralleling U.S. 15-501. Someone is building a storage facility along this stretch, probably biding his/her time, collecting some income, until he/she can sell the land for more when the line is built. We pass the old Herald-Sun building, and as I write this, I wonder, “Why not build the ROMF there?”

Paxton Media, which owns the H-S, has been trying to sell that building for at least a couple of years. It could be torn down and a ROMF built in its place. A ROMF requires 15-25 acres, and the H-S site is only eight. Adjacent properties could bring that total to about 12. But there are condos behind the old H-S building. In that case, never mind.

One thought on “I Walk the Line: Bound for the ‘burbs + no one on Cornwallis wants the ROMF”